[Update: YourStory made revenue of INR 4.5 crores in FY 14-15] The success story of ‘YourStory’

ToflerBloggerJuly 16, 2015Comments Off on [Update: YourStory made revenue of INR 4.5 crores in FY 14-15] The success story of ‘YourStory’
Share

The company makes revenue from events, advertorials, royalty from research reports and advertisements. The major expenses for the company was the employee expense, which stood at INR 2.4 crores (51% of the total expenses).

If you have even briefly tracked the ‘Start up’ world in India, you would have heard about ‘Your Story’. While I was strolling through the blog of Your Story, it occurred to me, “What is the story of Your Story”? And you will be amazed by what I found out.

Your Story earns revenue from ads, sponsorship and registrations received at events hosted by it. Its net profit margin is impressive, though, there is a dramatic decline from FY 2012-13 to FY 2013-14. 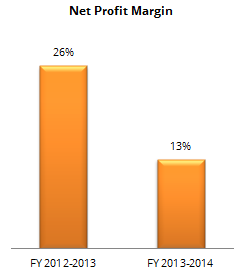 The other commendable thing is that the whole business is boot-strapped. Your Story has not raised any funds yet. Shradha Sharma still owns nearly 96% of the Company.

I was intrigued by the way ‘Your Story’ has taken the start up reporting world by storm. I was even more amazed when I saw that unlike the start-ups they cover, they make money while doing it! #Respect

Author – Anchal Agarwal is the co-founder at Tofler.  She is a CA, CS and has more than 5 years experience in Financial research and Company analysis.

Disclaimer – Any trademarks and logos used in this article are property of their respective owners.