Home Start-Ups Nuvo Logistics made a profit of INR 87 lac with a revenue of INR 19.6 cr in FY 14-15 | Tofler #CuriosityIsGood
Start-Ups

ToflerBloggerJanuary 8, 2016Comments Off on Nuvo Logistics made a profit of INR 87 lac with a revenue of INR 19.6 cr in FY 14-15 | Tofler #CuriosityIsGood
Share

Pepper Tap is an on-demand grocery delivery service based in Gurgaon, India. It is owned and operated by Nuvo Logistics Private Limited and was incorporated in August 2013. Nuvo Logistics also owns and operates Nuvo Ex which provides reverse logistics services to e-commerce players. 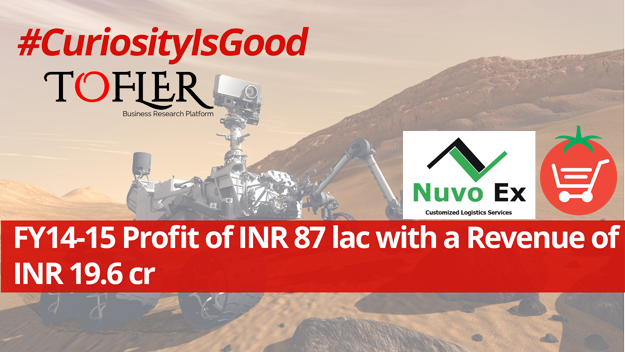 All of their revenue from operations is recognized from sale of services. Almost all of it is reported as ‘Courier Service fees’ with a miniscule amount reported as ‘Platform and logistic services’. A major proportion of this revenue must be attributable to Nuvo Ex since PepperTap had not started its operations before November 2014.

Out of a total expenses of INR 18.4 Cr in FY 14-15, almost half of it was incurred on Employee benefit. Transportation and handling charges accounted for 21% of their total expense. Surprisingly, marketing and business promotion expense remained low at less than 4% of total expenses. 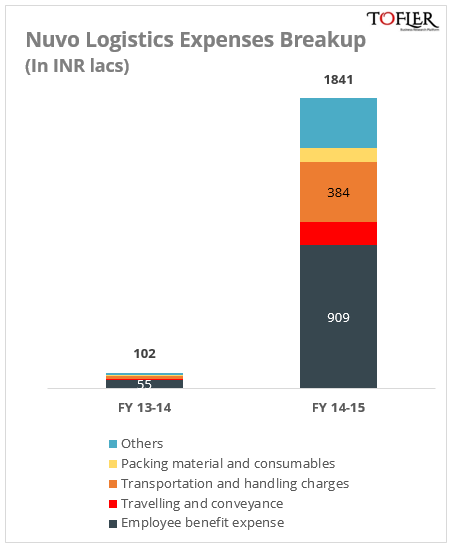 Nuvo Logistics started as a logistics e-commerce company. It was founded by Navneet Singh and Milind Sharma, both of them working with Delhivery prior to founding Nuvo. They started operations with Nuvo Ex, which provides reverse logistics services to e-com players and later conceptualized PepperTap and launched its operations in November 2014. Nuvo Ex is still operational.

First institutional investment in the company came from Sequoia Capital in December 2014 (nearly 1.5 years after company formation), followed shortly by SAIF Partners. Snapdeal (an e-commerce company) is also heavily invested into the company. Following is a summary of their major funding rounds so far:

Although it belongs to the newer crop of players, PepperTap has emerged as one of the front-runners in the space of online groceries delivery. They had added features like number disguising and order modification on their app few months back and acquired Jiffstore, a Bangalore based grocery hyperlocal delivery startup last month.

While the industry is trying to figure out the better model out of inventory based model and the marketplace hyperlocal model, giants like Ola, Flipkart, Amazon and PayTM are also beginning to delve into the space. In a very recent development, Grofers recently shut their operations in 9 Tier-2 cities saying that smaller cities are not ready for hyperlocal business yet.