Home In The News Dhoni, Amrapali and the Twitter Campaign
In The News

Mahendra Singh Dhoni is the brand ambassador for the construction sector giant Amrapali Group. On April 4, 2016 a campaign #AmrapaliMisuseDhoni was started on Twitter to protest against the alleged delay in completing of the Sapphire Project in Noida by Amrapali. It has since gone viral with a number of residents taking up their cause on social media. 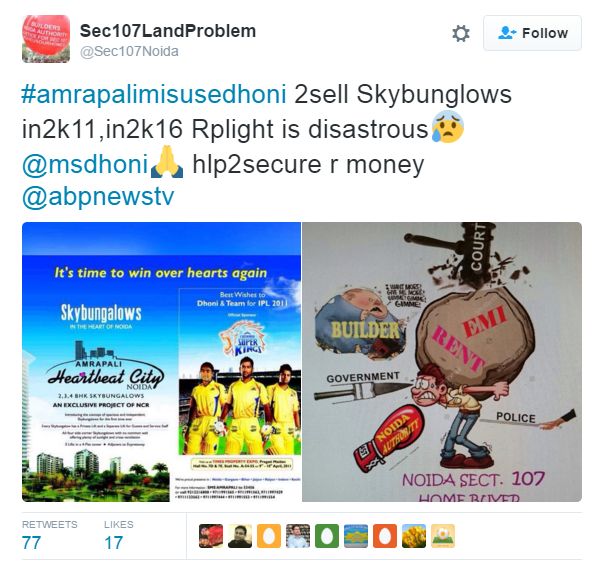 The construction of the project started in 2009, and although possession has been given to a number of families, residents say the civil and electrical work is still pending in a number of towers.

Construction companies in general are facing slow market and lack of funds. We took a closer look (due diligence) at the company financials to understand the health of the company.

The profit and net worth and debt figures are summarized in the following table (all figures are in lacs):

Notably, Dhoni is not only the brand ambassador of Amrapali Group, but his wife Sakshi Singh Dhoni is a Director in Amrapali Mahi Developers Private Limited, a joint venture between Dhoni and the Amrapali Group.

Anil Kumar Sharma who serves as the CMD of the Amrapali Group is the other director and holds 75% shares in the company. Sakshi holds 25% stake in the venture.

Responding to the Amrapali issue, Dhoni said that promises need to be met. He also mentioned that it has become difficult for the builders in the current economic scenario. Following the controversy, Anil Sharma issued a statement saying only 4-5% work is pending which will be completed in 2-3 months.