This ‘Unicorn’ has been profitable since inception | Mu Sigma | #CuriosityIsGood | Tofler

ToflerBloggerDecember 8, 2015Comments Off on This ‘Unicorn’ has been profitable since inception | Mu Sigma | #CuriosityIsGood | Tofler
Share

In case you are wondering what a ‘unicorn’ is – in business parlance, it is a startup company that has achieved a valuation of a billion dollars or more. India’s much coveted ‘Unicorn Club’ currently features eight startups. While most of them have now become a household name across the country, mahority of them are yet to attain profitability. There is one though, which is much less known among the Indian consumers (understandable so, since it is a B2B business), which not only is a ‘Unicorn’ but has also been consistently profitable since its inception. Mu Sigma reported a revenue of INR 684 crores and a whopping INR 380 crores profit in FY 14-15. This is a 32% growth in their revenue from previous fiscal and the profit stands at 56% of their revenue. 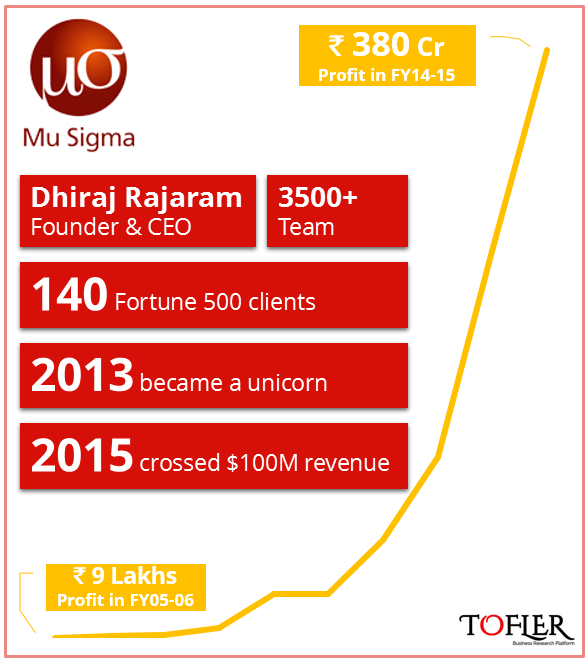 Mu Sigma is a Decision Sciences and analytics firm that helps companies institutionalize data driven decision making and harness Big Data. It specializes in the areas of marketing, supply chain and risk analytics. It was founded by Dhiraj Chidambaram Rajaram in 2004. The company employs more than 3500 ‘data science professionals’ and caters to more than 140 Fortune 500 clients. These include world’s largest retailers, pharmaceutical companies, banking institutions, insurance companies, technology providers, the list goes on. In fact, Microsoft, world’s largest software company, was its first client in 2005 and continues to be till date.

The growth of Mu Sigma has been spectacular. In 2005, Microsoft became its first client when it began a pilot project with Mu Sigma to understand consumer behavior. That year Mu sigma made INR 1 crore in revenue. Over the course of a decade, it has acquired some of the biggest companies in the world as its client, including Wal Mart and Dell. It secured funding from FTV Capital, Sequoia, General Atlantic and MasterCard over this period, and attained $1 billion valuation in 2013, being profitable all this while. Following chart presents their revenue and PAT growth since their inception. 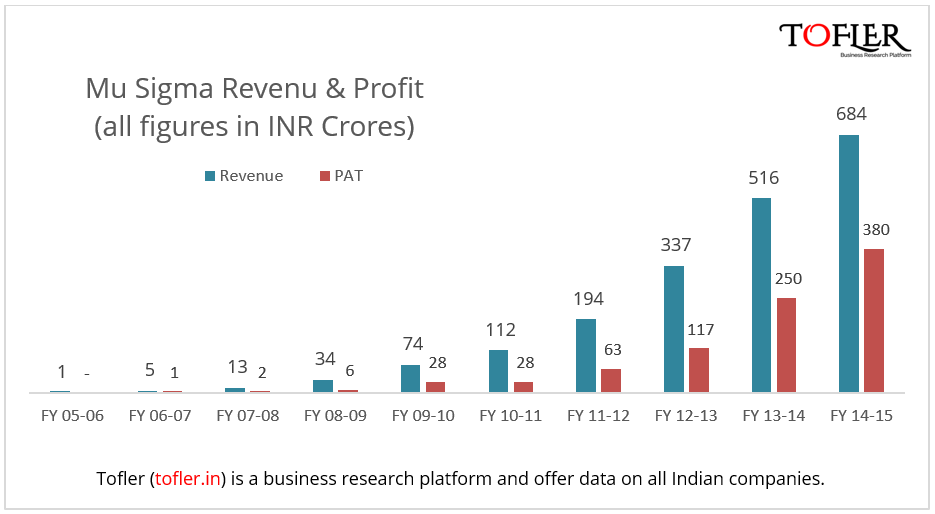 The revenue for Mu Sigma comprises of income from analytics and other IT and business processing outsourcing that it renders to its parent company Mu Sigma Inc. This revenue is recognized on the basis of agreed percentage of return on revenue earned by the Holding Company and fellow subsidiaries. The revenue from domestic business comprises time and material contracts in the nature of data analytics services. The major expense incurred by the company is the employee expense which stands at INR 176 crores (70% of expenses).

When Dhiraj Rajaram had sold his house to start Mu Sigma, even he might not have imagined his company would become India’s largest data analytics company and achieve revenue figures of $100 million. Not only does MU Sigma show that a startup can be profitable but also dominate the industry across the globe. With revenue and profits skyrocketing with every passing year, Mu Sigma continues to be an inspiration for entrepreneurs.