Home Start-Ups Practo’s revenue surged more than 10 times! and there is more to it | Tofler #CuriosityIsGood
Start-Ups

Practo’s revenue surged more than 10 times! and there is more to it | Tofler #CuriosityIsGood

ToflerBloggerJanuary 9, 2016Comments Off on Practo’s revenue surged more than 10 times! and there is more to it | Tofler #CuriosityIsGood
Share

Practo is a healthcare start-up, owned and operated by Practo Technologies Private Limited, which offers patients and doctors a unique platform to interact. It enables patients to search for doctors and book appointments and offers a practice management tool to the doctors. With over 15 lac monthly users and a global presence, Practo has disrupted the healthcare segment by offering an efficient way for doctors and patients to connect. 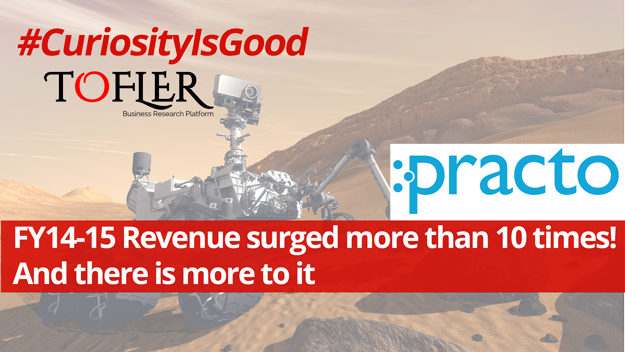 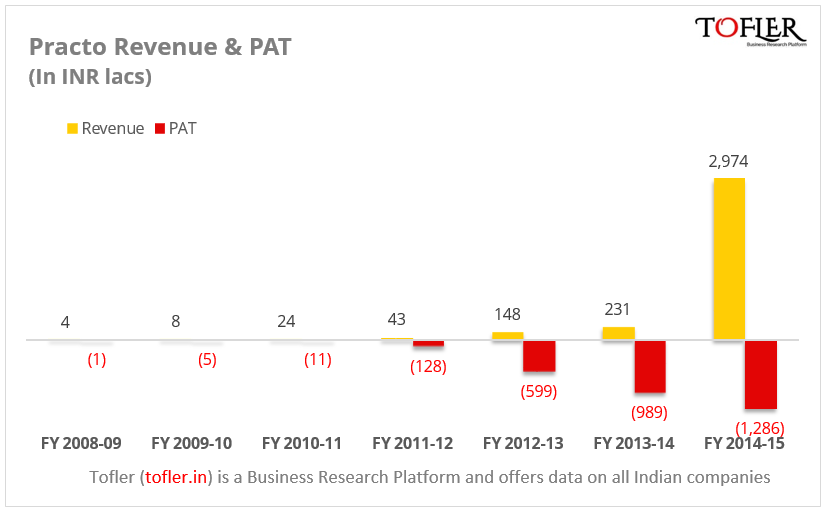 Practo Ray is the main offering by Practo. It is a Practice Management tool for the doctors that provides them access to a SaaS tool, enables anytime access to data, e-prescription, reports, analytics and more. The company obtains its revenue from the subscription that it offers to the doctors. This revenue amounted to INR 6.1 crores in FY 14-15 (INR 2.2 crores in FY 13-14).

Out of a total reported ‘Revenue from operations’ of INR 25.4 crores, INR 19.3 crores (~76%) has been reported as ‘Software development and support’ and ‘customer support and marketing services’ that it rendered to its holding company, Practo Pte. Ltd., incorporated in Singapore in November 2012. Another INR 3.9 crores (13% of total revenue) has been reported, under the ‘Other Income’ head, as the ‘sale of Intellectual Properties’ (including its products Practo Ray, Hello, Search, Tablet, website, domain name, all the codes and the Trademarks held) to Practo Pte. Ltd. These three heads combined, have led to a seemingly exaggerated revenue figure in FY 14-15. Here is a breakup of their revenue in the past two years: 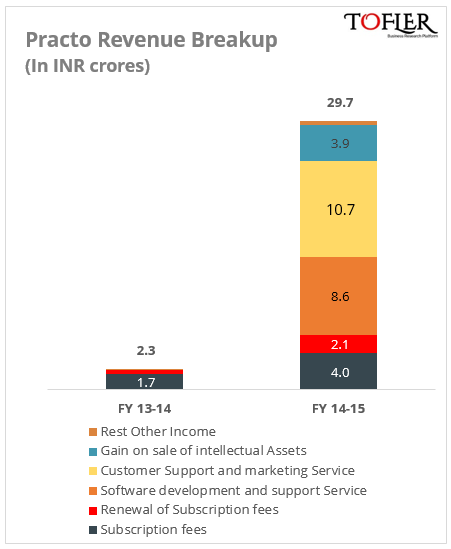 Apart from the Employee expenses that stood at 62% of the total expenses, the major expense was Advertising promotional expense at INR 4.4 crore. Notably, it had spent only INR 83 thousand on advertising in the previous fiscal. Here is a breakup of their expenses: 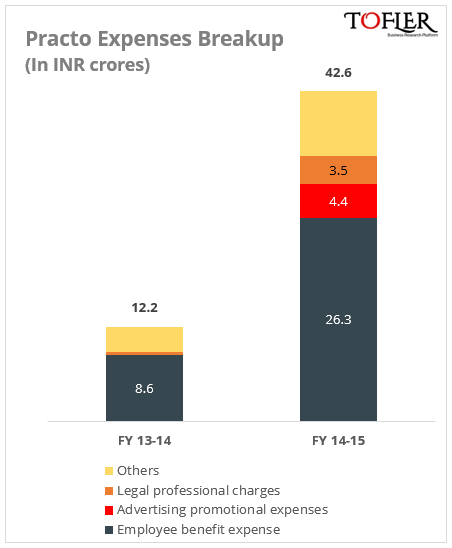 Back in 2008 when Shashank ND and Abhinav Lal founded Practo, they started its operations in Bengaluru. Over a span of 7 years, Practo has entered 15 countries across the globe. Recently it started operations in Kula Lumpur in October last year. The company claims to have more than 1.3 lac doctors on its platforms and more than 4 million monthly searches. They went on an acquisition spree this year, making four acquisitions in a span of five months – Fitho Wellness (fitness and preventive healthcare), Genii (a tech products development firm), Insta Health (hospital information management solution provider) and Qikwell (doctor appointment booking platform).

The company has raised a total funding of INR 298 crores so far. Out of this, about INR 11 crores came from Sequoia Capital during March 2011 to October 2012. Rest of the amount – INR 286.4 crores – has been routed through their holding company Practo Pte. Last fund of INR 164 crores was infused in September 2015.

In a crowded space of healthcare platforms, where a few like HelpingDoc have shut down and others like Fitho and Quikwell have gotten acquired, Practo competes closely with Lybrate. So far, it seems to be emerging as a clear leader in this space. In a latest bid, it partnered with Uber, to enable patients to book a cab through Practo app. Recently, it has also entered the beauty and wellness segment by bringing spas, salons and fitness centres on its platform.